Sports, Medicine and Health Summit | 20 - 24.4.2021
Home  Sports in diastolic heart failure: What training can be recommended?

Sports in diastolic heart failure: What training can be recommended?

In light of the aging population, it is no surprise that the prevalence of cardiovascular diseases has increased over the past ten years. Classical risk factors like high blood pressure, diabetes mellitus and lack of exercise lead – especially in older people – to increased development of heart failure.

Although it has long been assumed that functional limitations are to be expected mainly in systolic phases, diastolic heart failure is presently getting more attention. Increased stiffness and impaired relaxation capacity of the ventricle with preserved systolic left-ventricular function is characteristic for diastolic heart failure. It is therefore also called Heart Failure with preserved Ejection Fraction (HFpEF). Unlike systolic heart failure, or Heart Failure with reduced Ejection Fraction (HFrEF), there are hardly any reliable study results on possible therapies in diastolic heart failure, neither drug therapy nor training therapy. Results of preliminary studies with small patient groups, however, indicate that improved cardiorespiratory fitness brings increased performance capacity, quality of life and improved left-ventricular function in HFpEF patients (see here, among others).

Accordingly, it is recommended that patients with stable heart failure be encouraged to engage in moderate physical activity, even beyond a cardiac rehabilitation program.

Accordingly, it is recommended that patients with stable heart failure be encouraged to engage in moderate physical activity, even beyond a cardiac rehabilitation program.
It is important for doctors and therapists to be able to provide targeted recommendations for optimal training as additional therapy in the management of HFpEF patients. These recommendations should be based on knowledge of larger studies with many participants. Moreover, how long the positive effects of such training last must be examined.
The Exercise training in Diastolic Heart Failure (Ex-DHF) study addresses this gap in research and examines the extent to which targeted physical training can improve the symptoms, exercise capacity and stiffness of the heart in diastolic heart failure. A large multicenter study is to examine 320 patients who either undergo standard therapy or additionally perform a 12-month training program.
The planned study performance is described by Prof. Edelmann from the Charité Universitätsmedizin  Berlin and his colleagues in an article published in 2017 in the European Journal of Heart Failure; the article is to be found here).The study is funded by the Deutsche Forschungsgemeinschaft (DFG) 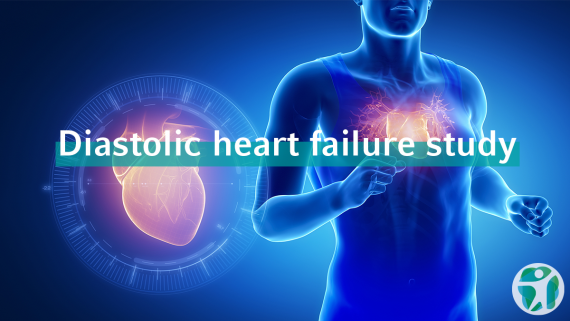 Duration and intensity of the training program examined and preliminary results

The research team has developed a training program based on the preliminary positive study results from 2011.

Training is held three times a week over a period of one year. Endurance training on a cycle ergometer is performed exclusively in the first four weeks of the program, whereby the intensity is increased from initially 50% to up to 70% of VO2max within the first month. In addition, the duration of the training sessions, including warm-up and cool-down, is increased within the first three months from 30 to 60 minutes.

After four weeks, strength exercises are integrated in at least two of three training sessions per week. Equipment training comprises seven exercises exerting the large muscle groups. Each exercise consists of 12 to 15 repetitions and is performed at an intensity of 60% of the single-repetition maximum (1RM) (see 1069-1070, Edelmann et al, 2017).

In the pilot study mentioned earlier, in which 64 HFpEF patients were examined, this program already showed positive effects on quality of life, performance capacity and left-ventricular diastolic function after only three months. The left-atrial volume index LAVI), a parameter depicting the reaction of the heart to increased pressure and volume load, could be improved.

Study results and experience in everyday clinical practice on the topic “Sport in Heart Failure Patients”, especially in patients with diastolic heart failure, will be presented and discussed in April 2021 during the interdisciplinary Sports, Medicine and Health Summit. In addition to cardiologists and sports physicians, everyone in medical specialties and professions  involved in care, such as therapists and rehabilitation sport trainers , is cordially invited to join in the dialog and exchange.


This article was written by: Laura L. Bischoff